How many years of work is needed to buy an apartment?

The leading real estate portal of Hungary just published an article to show how much years of work is needed to buy an apartment in Budapest and other major cities in the country. They made also a comparison with the value of our money 5 years ago, in 2015.

An interesting chart they prepared however I would have done it in a different way which shows more the reality.

The wages increased quite heavily in the past 5 years, according to statistics between 46-59%. That sounds very well! On the other hand prices increased dramatically. Especially property prices which show a much bigger increase. 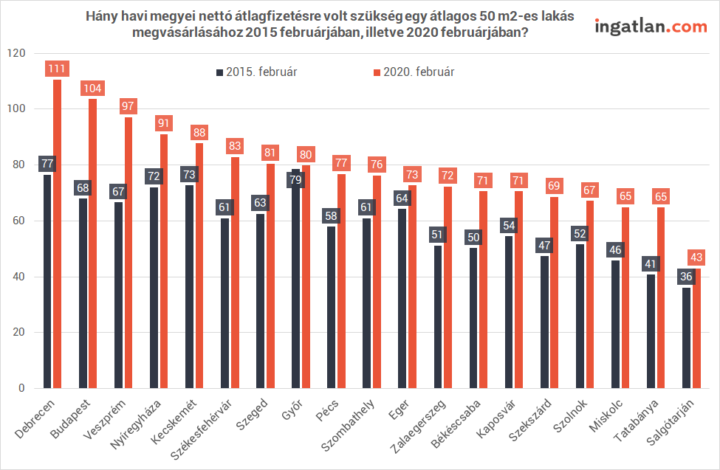 This 30 million HUF average apartment price must have been calculated based on all 50 sqm apartments for sale in all districts of Budapest. The offer of apartments for sale in the suburbs is probably much bigger than in the center which could lower the average price so much. If I look at central districts where I am working (1, 2, 5, 6, 7, 8, 9, 11, 12, 13) such an apartment costs already at least 40 million HUF which is 133 months of net wages.

But let us stay with the above figures of the chart. Already with those number it can be seen that since 2015 when 68 months of wages were enough to buy an apartment, the increase is 53%! Enormous.

And this increase – in my opinion – does not show the real increase, the real difficulty to have your own home. It shows the net wages but not the net savings. That is a big difference. An average person spends one third or even a half of his income on property rental, an other big part on all other expenses and happy if able to save 20% of his/her net wage.

It would interesting (sad) to see a chart showing that for an average person without any financial help or heritance from parents or grandparents would need 45 years of savings to buy a 50 sqm apartment.

What to buy in Budapest?

No matter how much money you have available to buy a flat, you need to make a compromise, but make a good compromise!

What a year we had! 2020 we will never forget. And it is still not over, we have more than a month ahead. In March, I felt like becoming part of a movie. Virus. Masks everywhere. Distance keeping. Borders closed. Schools closed. Shops are cleared out by a mass of buyers. Is it real?

How can an agent help me during the sale of my apartment?

Being grateful for the trust of clients